Mental toughness is many things and rather difficult to explain. Its qualities are sacrifice and self-denial. Also most importantly, it is combined with a perfectly disciplined will that refuses to give in. It’s a state of mind – you could call it character in action.

Top basketball officials maintain confidence, self-control and concentration during difficult and intense games. These abilities are survival skills. All human activities are challenging, but being successful at the top levels requires great mental and emotional strength, alongside physical and technical excellence.

Failure is part of the Dance.

The mentally tough official must be able to cope with insecurity, treat setbacks and mistakes as part of the price to be paid and withstand what may seem like constant criticism of performance. Setbacks and mistakes have to be analysed, placed in the perspective of the whole season, forgotten and then a refocus on a positive approach that underlines the benefits of staying strong in the face of adversity.

The feelings of failure are in reality the doorway to ultimate success; of all the physical and mental qualities a performer must possess, mental toughness is the most important.

Mental Toughness is a Winning Attitude

Mental toughness is the ability to impose physically through performance, what an official is committed to mentally. If that commitment wavers because of a setback or mistake, then clearly the performance will lean towards failure.

Officials, mentors and Instructors must create a training and competition culture that constantly shapes the state of mind in a positive and confident way. Mental toughness is a state of mind that officials can develop by applying these principles:

It is a well-established fact that a positive state of mind leads to positive emotions and high positive energy needed for successful performance. The table below illustrates the same process, albeit very simply, using an example of how two officials, one mentally tough and the other mentally weak, might react to missing a foul on the play

The ideal performance state and mental toughness we seek are characterised by a clear sense of purpose and direction, a high degree of resilience, emotional calmness and the fuel of high positive energy.
The following steps should become essential elements of officials’ training and performance routines.

Our performance is often the result of our expectations, so unless we think and feel like “winners” we will not perform like “winners”. Officials should check themselves for the following practices, which can develop a successful state of mind.

Positive self-talk and confident body language will transform the anxious official into a successful, assertive official – fix the body language and the mind stands tall.

The most important question an official must answer is why he/she commits to the challenge, accepts the criticism and deals with the setbacks and mistakes. It takes courage to step onto the court at the start of the game. An official can only reach that level of arousal by being totally motivated.

Commitment to officiate is a choice and nothing can affect performance as dramatically as a sudden loss of motivation. Without motivation, without the drive to achieve, the official cannot develop the mental toughness to survive the challenge of basketball. Problems become barriers not challenges.

Sources of motivation are both intrinsic (internal) and extrinsic (external). A mentally tough official will be self-motivated and self-directed. The official is involved because he/she wants to be. The following diagram identifies how the official’s motivation must move through certain stages, levels or challenges before becoming an intrinsic element of mental toughness. 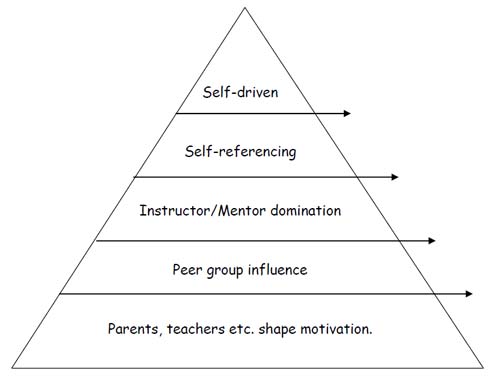 Diagram - The Route to self-motivation and mental toughness

In the early stages, family and friends tend to motivate officials.  Aspiring officials then move on to the more critical influence of Instructors and mentors. Many officials do not survive these stages and drop out because they lack either physical ability and/or mental strength.

The final stage when motivation switches from extrinsic to intrinsic, is when mental toughness becomes critical. The official is now driven by comparisons with officials he/she admires and a desire to perform to potential. Rather than relying on the views of others, the official now checks his/her performance against personal standards. Although not isolated from external influences, the official now controls his/her state of mind and is much tougher mentally.

It helps of course if the official’s social support group is positive and supportive during the journey to excellence. Although male officials benefit from intrinsic and extrinsic sources of motivation, female officials may not receive complete social support at certain stages in their development. They must rely upon their intrinsic drive to officiate, which maybe why the most successful ones are so mentally tough.

For an official to feel positive and confident about the challenge of a tough game, he/she must feel physically capable of meeting the expected demands. Any questions about fitness, strength and energy potential will begin to sow the seeds of doubt and anxiety, undermining performance before the official steps out on the court.

This may be a significant issue for:

Motivation and confidence are inextricably linked with the willingness and capacity to work hard to ensure the best chance of success. When Instructors and officials work hard to prepare for performance, they build a belief that they have paid the price for success. By committing to effort, they not only become physically tougher but mentally tougher.

The harder we prepare, the harder it is to surrender.

Officials, especially younger ones, should read the autobiographies of great players, coaches and officials in basketball and other sports. They will find time and time again the message of the importance of having a work ethic in order to succeed. Julius Erving, the legendary Dr.J, said it took him a whole career to become an overnight success. Michael Jordan said it took him the whole of the 1980’s to become the accomplished player of the 1990’s.

Mentally tough officials are the product of not only hard work but also smart work. They know when to work hard and when to recover. Within their training and lifestyle they will incorporate good diet and nutrition, sufficient sleep, relaxation and massage. Their self– discipline should always triumph over temptation – alcohol, sex and tobacco will not disrupt or harm their development.

When the going gets tough, the tough get going.

Being mentally tough means being POSITIVE in the face of adversity, especially when a situation in a game produces an emotional surge that the official attempts to control.

Mentally tough officials see problems and mistakes as part of the environment if they wish to perform in basketball. When situations arise they have the self-belief to view them as challenges to overcome. Officials cannot choose what happens but they can choose how to respond.

Dealing with criticism, mistakes and emotions is essential to an official’s development. Therefore much of the work of Instructors and mentors should be in preparing officials for likely situations through discussion and video analysis. Self-control is always the best way to meet challenges.

Motivation is especially important when an official, for whatever reason (injury, stress, personal tragedy etc.) goes into a period of decline. Some thoughts on dealing with this are:

The attitude and behaviour of the Instructor/mentor strongly influences the performance of officials. They cannot expect to have a mentally tough group of officials unless they plan a programme that emphasizes and reinforces positive attitudes to success.

The Instructor/Mentor as a Role Model

The Instructor/Mentor is an important and influential authority figure in officials’ lives. The body language, attitude and expressions of the Instructor/Mentor can shape, reinforce or damage the officials’ self-esteem and confidence. This is especially true for younger officials in a society of increasing one-parent families.

If mental toughness is about meeting challenges with positive self-control, then the starting point, both in training and in performance, must be the Instructor/Mentor. Never are they more tested than after a poor performance by one or more of their officials.

The aftermath of a poor performance is a tough moment for the Instructor/Mentor. They can choose to yell or sell, but those that want a mentally tough group of officials must demonstrate a controlled way to deal with emotional setbacks despite personal feelings. The Instructor/Mentor will find that a disciplined post-game routine is helpful in ensuring that they do not get either too high or too low.

The impact of an Instructor/Mentor on an official’s mind-set and performance is described as:

Successful Instructors/Mentors will use ideas, stories, metaphors, and videos etc. to shape the mind-set of officials and prepare them to be mentally tough in performance. If the Instructor/Mentor shows an unwavering belief in the ability of the officials to achieve despite the challenges, then they have a framework for building the mind-set and will become increasingly motivated.

Handling mistakes and situations is another important area of responsibility for the Instructor/Mentor. The Instructor/Mentor’s reaction to mistakes is the key to the officials’ motivation and desire to work hard to correct mistakes. They have two choices:

Your emotional reactions to failure can often blind your perspective and interfere with your ability to bounce back.

If mental toughness is a state of mind, then Instructors/Mentors must integrate its development into every aspect of preparing officials. Therefore preparation must:

By controlling the mood of the officials during training and preparation, often under exacting conditions, the Instructor/Mentor is preparing the officials emotionally for the game environment. When the pressure arises, the officials then have a solution bank of responses and are not surprised or caught unawares by the situation.

One way officials can become mentally tough is by accepting responsibility for their thoughts, feelings, actions and rejecting all possible excuses. Instructors/Mentors can help by questioning and listening – not always telling officials what they did wrong but encouraging them to talk about what they could have done better.

Michael Jordan, probably the most complete basketball player to date, was very strong on this aspect of mental toughness:

People always want to blame someone else or some circumstance out of their control for their problems. You find a way not to accept the blame. The better performers learn to say, “I performed badly, but tomorrow I will be better”. A lot of young performers are afraid to admit they have bad nights, but everybody has bad nights and it’s how you rebound from these bad nights that dictate what kind of performer you are going to be.

We have 40 million reasons, but not a single excuse.

To excel at a challenging activity like basketball officiating and have the ability to recover from the inevitable setbacks along the way, officials and Instructor/Mentors must possess a high degree of mental toughness, defined as the ability to impose physically what is committed to mentally. It is clearly the result of developing a positive attitude to success.

This state of mind consists of a strong self-identity, high intrinsic motivation, a good work ethic and excellent self-control in pressure situations. As a role model for officials, the Instructor/Mentor must demonstrate mental toughness in preparing for games, coping with the emotional nature of the environment and dealing with mistakes and failure.

Mental toughness starts with the personality and attitudes of the individual official, but it is enhanced by a “team” culture that consistently reinforces the value of being POSITIVE in the face of adversity.