The most powerful weapon an official has is the mind. Great officials are those who demonstrate total control of the mind as well as the body. The power of self-belief as a precursor to success is a well-documented fact.

“as we begin to realise that we are not totally the victim of genetics, conditioning and accidents, changes begin to happen in our lives, nature begins to respond to us in a new way and the things we visualise, even though unlikely, begin to happen with increasing frequency – our bodies tend to do what they are told to do, if we know how to tell them”

To be successful in challenging situations, officials need to build strong self-portraits, views of themselves as good officials who can cope with whatever arises during a game. Visualisation, using all the senses to recreate or create an experience in the mind, is a process that can train the inner mind to build that self-portrait. By using vivid imagery, officials can recreate the game and all its demands in their minds and develop a mental plan that prepares both their confidence and their strategies for coping with situations.

This mental skill requires an official to imagine himself/herself playing basketball – seeing, hearing, feeling and “smelling” the action on the court. To avoid too many images and possible distractions, the official should combine visualisation with a state of deep relaxation. The official can then focus sharply on the imagined action.

“the images become so alive that your central nervous system fails to distinguish between real or imagined events, your body responds to each in the same way. Thus an official who pictures each move of an event correctly in advance, will have a greater chance of repeating these moves, having in a sense practised them before the actual event happens”

Think of visualisation as a dress rehearsal. It is a form of practice that makes you familiar with the situation. The official should try to recreate the sight, physical sensation, sound and purpose of the basketball scene in order to achieve a more realistic simulation and greater personal benefit. Now the official can see himself/herself in the situation, choosing the correct course of action, carrying it through with excellent effect and even hearing occasionally, the approval of the spectators and a positive comment from the coach at the receiving end of the call.

The key to visualisation is that a positive image of each situation now exists in the official´s mind. The official can recall it when a similar situation presents itself later in the game or even in the next game. Clearly the more an official practices visualisation, the more accurate the images will become. The memories will become stronger, the images more accessible and the emotional support more powerful, boosting confidence and motivation.

Diagram of the Process of Visualisation 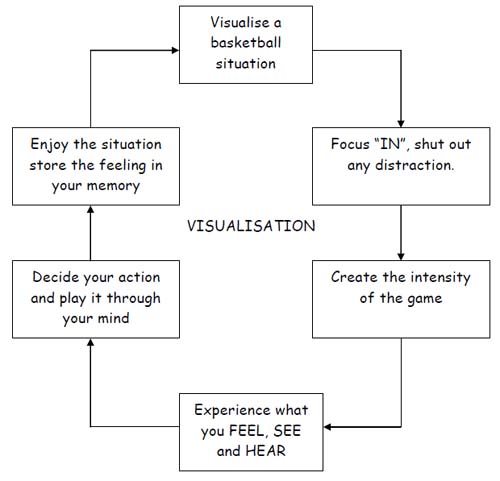 Instructors, Mentors and Officials who use visualisation believe it helps them to:

To maximise such benefits, officials should observe the following approach:

It has often been shown that the best kind of learning is a combination of visualisation (mentally rehearsing the situation) and physical practice and experience. Officials develop an “image book” in which they can visualise in detail the stimulus-response trigger when a given situation arises during the game.

To perform well, an official must understand the tactics employed by the competing teams and his/her role within the game. When a team changes tactics, quickly and significantly, (e.g. zone defence to full court press), as often happens at the highest levels, officials must be mentally prepared to cope with the change.

Officials employ different ways of warming up mentally and physically for a game. Most include some form of visualisation, rehearsing plays in their mind. Officials often sit quietly and mentally rehearse the concentration they need for their first involvement in the game; the first toss, the first basket and the first whistle (foul, violation etc.). The pre-game conference should contribute greatly to this process.

Although officials often perform in “automatic mode”, letting habits dictate in certain specific situations, they do have time to think, albeit in microseconds and can therefore rehearse their reactions. Although it is impossible to reproduce every situation that may arise, with visualisation we can prepare the minds of the officials for any surge of emotion and help them create disciplined performance routines that they can employ.

During the “long walk” to the centre circle to commence the game, the officials can begin rehearsing an approved routine in their minds that helps them to avoid distractions and also boost confidence at this key moment

All officials feel stress, but successful officials learn to cope with it very well. Some even learn to thrive on it. With referees who are susceptible to stress, visualisation can be a useful tool in preparing for emotional expectations. When such an official visualises a challenging game, he/she normally sees moments of potential stress and negatively programs the mind. An Instructor, mentor referee or Sports Psychologist can change this picture by reminding the official of his/her ability, experience, past success, strengths and other positive issues.

An Instructor may ask of an official: –

So for example, a referee gives a technical foul for unsportsmanlike behaviour by a coach, he must maintain composure and shut out any emotional distractions, whist retaining control of the remainder of the game.

Clearly the more an official sees himself/herself as being competent and successful, the more that official will perform in that way. Instructors must find ways of reminding officials of how good they can be now and also in the future, not how poor they were! The message must be strong enough for the image to become a lasting reality. Officials with strong self-esteem are far more likely to accept criticism of performance without damage, as their inner mind will show them as competent and successful but with the capacity to accept and learn from constructive criticism.

A sudden injury – and the resultant withdrawal from the excitement and involvement of a nomination – can often damage an official psychologically. As always the official has to make a professional decision as to how to regard the injury:

The official´s support group – family, colleagues, instructor/mentor, medical team – has the job of encouraging the official to visualise the injury and rehabilitation in a strong, positive manner. Although the official may not be able to practice physically during treatment, visualisation promotes some maintenance of skills during recovery. Many physiotherapists believe this helps speed the healing process..

The mind and the body are so strongly linked that when an official visualises an action the body begins to prepare a response. If the official learns to visualise positively, the body will prepare for the action in a positive manner with increased energy. Officials who visualise negatively will experience the reverse.

Instructors and evaluators who are aware of this effect should be careful to present officials with comments and images about their next game that evoke the required visualisation and therefore the correct energy state. Officials who visualise positively will be in a state of high positive energy. Officials who are complacent or not fully aroused will find themselves in a state of low positive energy – a relaxing place but not where we want to be for success. Without proper mental preparation officials run the risk of an inconsistent performance. Officials who do not care or feel overwhelmed will produce low negative energy.

Finally the most dangerous state of mind is high negative energy. Officials find themselves in uncontrolled emotions, negatively burning up energy. When an official or team of officials is not mentally disciplined, an adverse event in a game or even pre-game can throw them completely out of control and reduce the chances of a successful performance.

Visualisation is a mental tool that some Instructors and officials find helpful in preparing their minds to meet the challenges of the game. A clear link has been established between positive thinking and the likelihood of positive action, so officials are encouraged to spend time visualising and analysing themselves performing with excellence.

What you often see is what you get.

Visualisation is recommended for building confidence, developing strategies to cope with stress, understanding tactics and strategy and assisting recovery from injury. Of great importance is the link between visualisation – how we see ourselves – and our emotional state, energy state and therefore our potential for performance. As we exercise the mind grows stronger. The more the referee pictures success, the more energy he/she creates to achieve it.